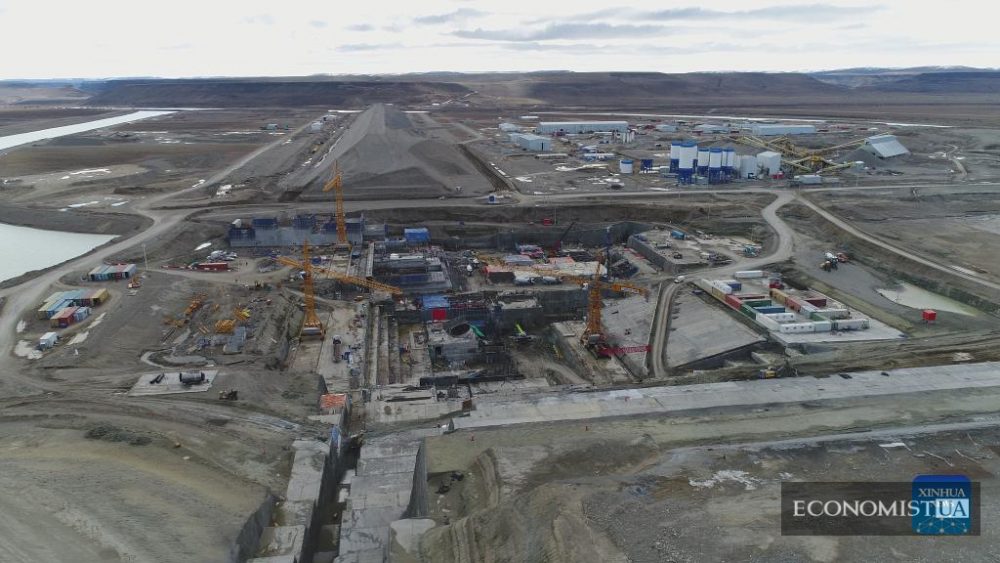 BUENOS AIRES, Sept. 27 (Xinhua) — Argentina and China are combining efforts to complete two dams in southern Patagonia, which will realize Argentine’s «energy dream» of being less dependent on energy imports.

Located on the Santa Cruz River, the Nestor Kirchner-Jorge Cepernic Hydroelectric Power Plant, the largest initiative in bilateral cooperation, began in 2013 when the Chinese company Gezhouba Group Corporation and other Argentine firms formed Chinese-Argentine consortium — UTE Represas Patagonia — with the aim of improving the country’s energy infrastructure and satisfying the electricity needs of more than 1 million families.

«Once the work is completed, the average annual power generation will reach 4.95 billion kilowatt-hours, which means that the installed power capacity in Argentina will grow by approximately 6.5 percent,» Mariano Musso, director of institutional relations for the project, told Xinhua.

Once finished, the hydroelectric plant can cover the daily electricity consumption of 1.5 million Argentine households, cut almost 1.1 billion U.S. dollars in oil and gas import expenses each year, and even allow for the export of electricity to neighboring countries such as Brazil and Paraguay, Musso said.

Argentine and Chinese staff at UTE Patagonia have faced numerous challenges, ranging from adverse weather conditions to being away from their families to working amid the COVID-19 pandemic.

«The Nestor Kirchner and Jorge Cepernic dams are being built in the southernmost part of the world, where the climate is a challenge. And due to the characteristics of the terrain, the winds can reach gusts of more than 100 kilometers per hour. When the temperature drops extremely, construction tasks also become very difficult,» explained Musso.

In addition, the project is located far from urban centers, but the workers said they overcome this challenge «by living in a community.»

They also have to face environmental impact given the plant’s proximity to the iconic Perito Moreno Glacier, located about 100 km from the site. China’s experience and advanced technology have guaranteed the environmental sustainability of the project.

«To prevent the project from affecting the Perito Moreno Glacier, in the area of the water source, the storage height of the reservoir was reduced by 2.4 meters from the original plan,» said Zhang Hongzeng, deputy director of the Project Design Management Department.

«The hydroelectric plant has been designed with fish passes and ecological bottom wells,» Zhang added.

He said project organizers «also hired experts in archeology and paleontology to detect fossils that may exist at the construction site and to carry out protective excavations.»

«Once the project is completed, a museum will be built in a nearby small town to display all the valuable cultural relics or fossils that were unearthed,» Zhang said.

At the peak of the COVID-19 pandemic, the group had to continue the project with proper hygiene and safety protocols after the government allowed the project to proceed.

Workers complied with isolation measures and testings were carried out, while communication was maintained with local medical institutions on the donation of hygiene supplies and exchange of experiences in prevention and epidemiological control.

China’s experience in epidemic prevention has given Musso a lot of inspirations, and he has worked closely with his Chinese colleagues to better control the outbreak.

Besides increasing energy sufficiency in Argentina, the plant has also improved the living conditions of many.

«The project has brought very important and very tangible changes,» Musso said, explaining that it has generated jobs and built roads for the local communities where «we could only see the landscape of the Patagonian Desert before.»

«We are constantly developing the villages where the workers live. We say that we are building small towns with all their services,» Musso said.

In 2020, Musso was awarded the title of the first Silk Road Friendship Envoy for being one of the most notable representatives of the dams, which are part of the China-proposed Belt and Road Initiative.

«The changes are really very important and the Belt and Road Initiative has really shown its benefits. Cooperation between countries to develop infrastructure is having a very positive impact on the region and on Argentina,» Musso said.