A «HEARTFELT» GIFT TO UKRAINIANS FROM THE EMIR OF KUWAIT 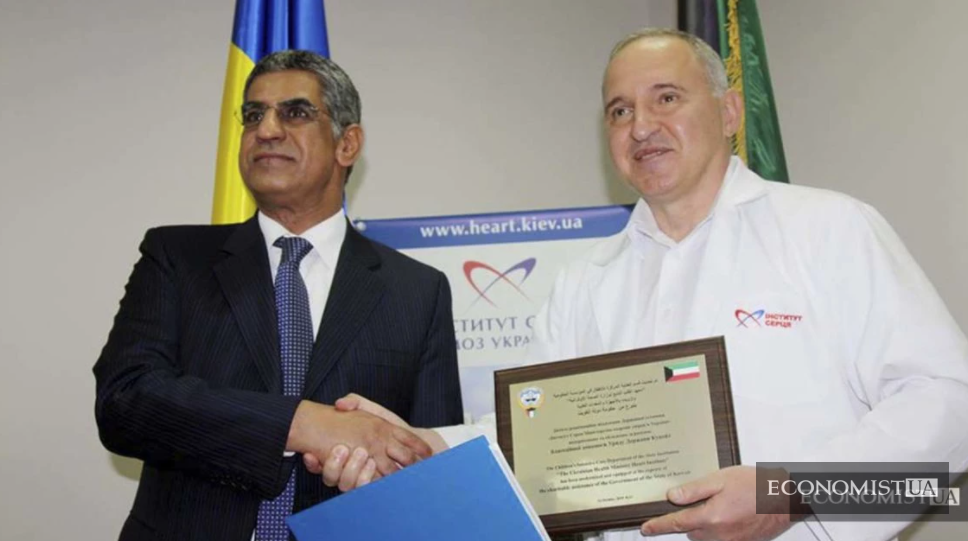 The Heart Institute of the Ministry of Health of Ukraine hosted an official ceremony of handing over state-of-the-art medical equipment as part of charitable assistance supported by the Government of the State of Kuwait. The expensive equipment was received from Ambassador Extraordinary and Plenipotentiary of Kuwait to Ukraine Rashid Al-Advani by  Director of the Heart Institute Boris Todurov.

According to Todurov, the equipment is the newest and it will be especially useful for the paediatric intensive care unit of the Heart Institute.

The total amount allocated by Kuwaiti benefactors for the purchase of the kit was more than 3 million hryvnias. The equipment includes 3 mobile ultrasound machines transmitting data to a smartphone enabling rapid diagnosis of a heart attack; the latest Japanese Holter — a portable device for daily monitoring of an echocardiogram; a modern ECG machine; 40 infusomats — resuscitation equipment for long-dose intravenous administration of drugs and nutrients to patients; finally, thermal imagers for vein function, which enable first-time puncture of a vein, which is especially important for children and people with diabetes.

The director of the Institute thanked the Kuwaiti side for such a truly heartfelt act, which will help many Ukrainians and foreign patients of the clinic to leave diseases related to heart defects behind. As Todurov pointed out, the amount of work done by the Heart Institute is colossal — 6,000 operations a year.

The renowned cardiac surgeon is convinced that this diagnostic and treatment equipment, which lacked the center, will save thousands of lives a year.

It is worth mentioning that Boris Todurov was the first heart transplant surgeon in Ukraine. The renowned cardiac surgeon has also participated in various peace missions, during which he visited Arabian countriesl: for example, he operated 16 children with congenital heart diseases in Egypt and performed 2 such operations in Iraq.

During the meeting, Olga Bogomolets, the head of the Verkhovna Rada Health Care Committee, expressed through her representative her gratitude to the State of Kuwait for helping develop Ukrainian medicine.

Representatives of the Ukrainian Foreign Ministry also highly appreciated the charitable contribution of Kuwait and the active humanitarian position of the Emir of Kuwait Sheikh Sabah Al-Jaber Al-Sabah. Head of the Arabian Peninsula Department Ruslan Nechay noted that Ukrainian-Kuwaiti international relations are 25 years old. «Kuwait was the first Arab country to respond to the Chernobyl disaster by donating $15 million to build a protective shelter,» the diplomat recalled.

The Kuwaiti ambassador, Rashid Al-Adwani expressed hope that the donated equipment would facilitate the work of the renowned Institute and help in the early recovery of children and adults.

«This joyous event shows how much the state of Kuwait values the fruitful cooperation with Ukraine and underlines the mutual desire to strengthen the friendship between our countries,» Rashid Al-Adwani said.

We would like to add that this is the second charitable action of the Embassy of Kuwait for Ukrainian hospitals, not long ago humanitarian aid was provided to the International Clinic for Rehabilitation of patients with cerebral palsy according to the method of Professor Kozijavkin in Truskavets.